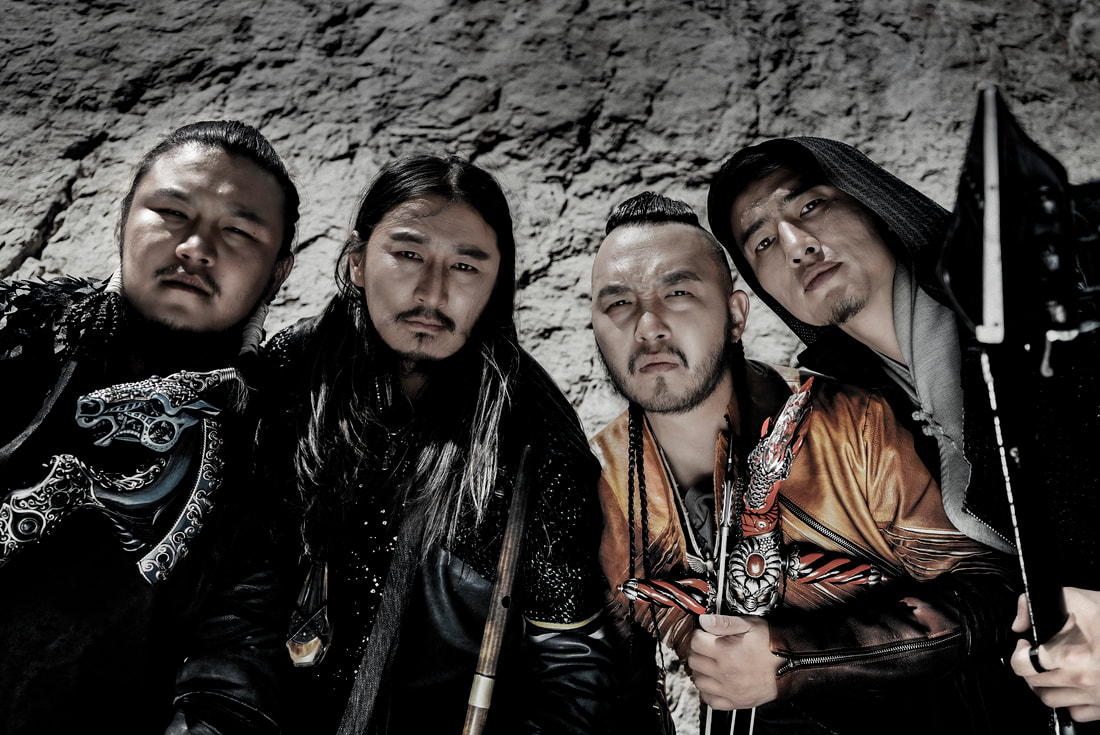 I recently met and fell in Love with The  HU , it appears I am late to the game as from the counts on their videos they have already taken the world by storm with their amazing Mongolian Metal.

The HU is a band from Mongolia that blends heavy metal and traditional Mongolian throat singing.  Their first two videos (“Yuve Yuve Yu” and “Wolf Totem”) immediately went viral garnering the band over 100 million views.  The explosive reaction to The HU resulted in a number of features about the band in international media such as NPR, ET India Times, Playboy Mexico, Jack Canal+Fr, Hong Kong 01, DW News Germany and others.

The band’s name The HU, is the Mongolian root word for human being.  They call their style “Hunnu Rock”…inspired by the Hunnu, an ancient Mongolian empire, known as The Huns in western culture. Some of the band’s lyrics include old Mongolian war cries and poetry.
Founded in 2016 in Ulaanbaatar, Mongolia by their producer Dashka, along with the members Gala, Jaya, Temka, and Enkush. The HU combines Rock Music with traditional Mongolian instrumentation like the Morin Khuur (horsehead fiddle), Tovshuur (Mongolian guitar), Tumur Khuur (jaw harp), guttural throating singing and the bombastic bass and drums of rock.
All four members have earned Bachelor’s or higher degrees in music and have several years of touring experience throughout Asia and the Pacific Rim.
Since the formation of the band, they’ve been working on their first album, The Gereg.  The word Gereg was used as the first Diplomatic “Passport” by the Mongol empire during the time of Genghis Khan. The album contains nine songs including viral hits “Yuve Yuve Yu” and “Wolf Totem”, and was released on September 13, 2019 via Better Noise Music (f/k/a Eleven Seven Music). \
​
Gala / Lead Throat Singer and Morin Khuur
Enkush / Lead Morin Khuur and Throat Singer
Jaya / Jaw Harp, Tsuur, Flute, and Throat Singer
Temka / Tovshu

Excerpt from NME:  The four-piece have racked up over 70 million YouTube views with their unique combination of heavy metal and traditional Mongolian throat singing.

“Our heritage and history is very important to us, as it should be to everybody. We wanted to tell our side of the story to the world because he is known as a warlord conqueror, but there’s another side to him. He was a visionary who brought the first diplomatic passports to the world, the first postal service, international trading, and most importantly, the first religious freedom in the Mongolian Empire, which was in the 15th Century. That’s a very progressive thing to have, and for that reason we wanted to focus on these kinds of messages. We respect our past generations because they’re the reason we’re here today. That’s why we always sing about respecting our elders and parents.”

“We’ve got a lot of things we want to do. We want to stay active as long as possible, release many albums and go all around the world to share our message and our culture as Mongolians. We want to become one of the legendary bands.”