Inspiration often strikes from the most unexpected of places. Such was the case when Indian musician Baiju Dharmajan was hit with the idea for Sweet Indian Child Of Mine – a cover of the Guns N’ Roses classic which, if you hadn’t surmised from the name, fuses the hard rock standard with intricate elements of Carnatic music. After catching 10 seconds of the track being played over traditional Indian music on television, Dharmajan’s imagination was sparked by how easily this music from east and west came together, and the rest, as they say, is history. The result is the latest in a series of rock covers to set the internet ablaze, only this time the skill and musicality of Dharmajan and his partner Girish Pradhan has elevated the song from a viral musical novelty to a hit in its own right.

Both seasoned musicians – Dharmajan a prolific record producer and soundtrack composer, and Pradhan one quarter of heavy metal band Girish And The Chronicles, the only band from his region of India to ever have toured internationally – the duo bonded over a shared love of rock music. “I met Girish at a rock festival, two or three years ago,” says Dharmajan. “His band was opening for my band Syndicate. I went to the side of the stage to check them out, and I was thunderstruck by his voice. I met him backstage after the gig, and that’s where the idea of collaborating came from.”

As soon as the pair joined creative forces, Dharmajan was convinced they’d hit gold – though it took its time in coming together. “We’re both so busy that because of our schedules, we couldn’t record the song for two or three years after coming up with the idea,” explains Dharmajan. But the wait would pay off, and Dharmajan describes working with Pradhan as “a wonderful experience. He’s such a down to earth guy, he’s always bringing new ideas and happiness. The moment we recorded this song, I knew it was going to be a big hit.”
​
But Dharmajan’s musical roots go back much further than that meeting. His grandfather, a Carnatic [a Southern Indian classical sub-genre that draws heavily from ancient hindu tradition] musician, was his inspiration for getting into the music business, and he comes from a family of musicians. “Literally everyone in my family plays a musical instrument, and most of them are good singers too,” says Dharmajan. “But none of my family members have pursued music as a profession except me and my grandfather. I picked up the guitar at the age of 13, and by 15 was playing professionally – so for the last 30 years I’ve been playing this wonderful instrument called guitar, and getting to work with some of the best talents in the country.” 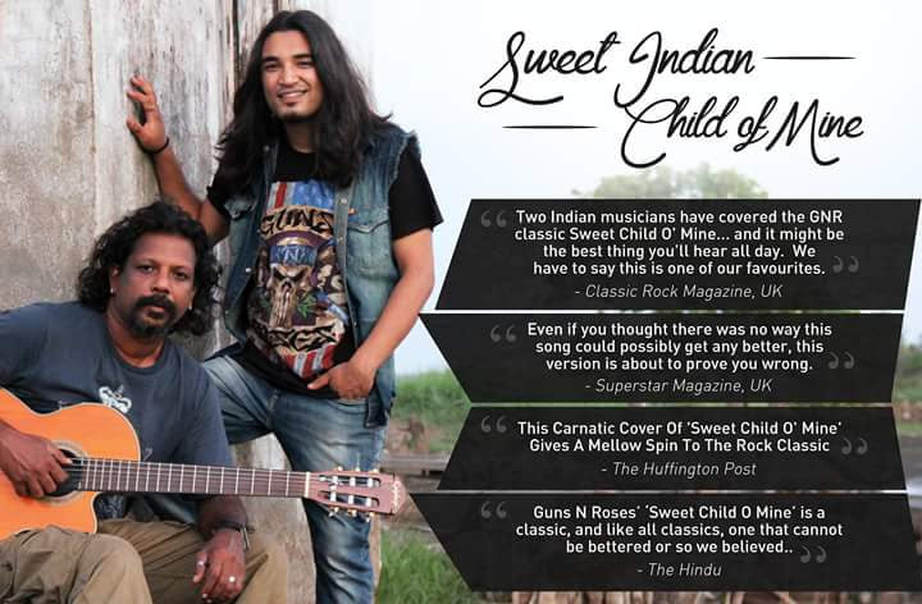 ​Despite this background, Dharmajan insists his technical knowledge when it comes to music is limited. “I’m a self-taught musician – I know nothing about theories or chord progressions,” he says, before admitting “though I do have more experience with Indian film scores and classical music than I do with western music theories.” Again, his inspiration points towards the music of his childhood. “I grew up with all this Indian film music and classical music, not with the Beatles, or Jimi Hendrix – so playing this fusion of eastern and western music is like a natural progression for me.”

Suddenly a door is open for Dharmajan and Pradhan to bring their fusion to a wider audience – the reaction to Sweet Indian Child Of Mine certainly hints at an appetite for it – though you might be in for a bit of a wait. “Right now I’m working on a new album with my band Syndicate, and I’ve got a couple of production jobs on,” says Dharmajan. “But Girish and I do definitely have plans to record more songs like this”.
​
When the question of fame is raised, Dharmajan quickly becomes coy. “I won’t do anything for personal gain,” he protests. “I don’t care about things like opportunities or money or whatever. If anything happens for the good from this that’s okay – but if nothing comes from it, then that’s just life.”
So he really isn’t enticed by the promise of fame or a higher profile? “My motto is take care of your karma first,” he says, “and the rest will follow”.
Baiju Dharmajan on Facebook