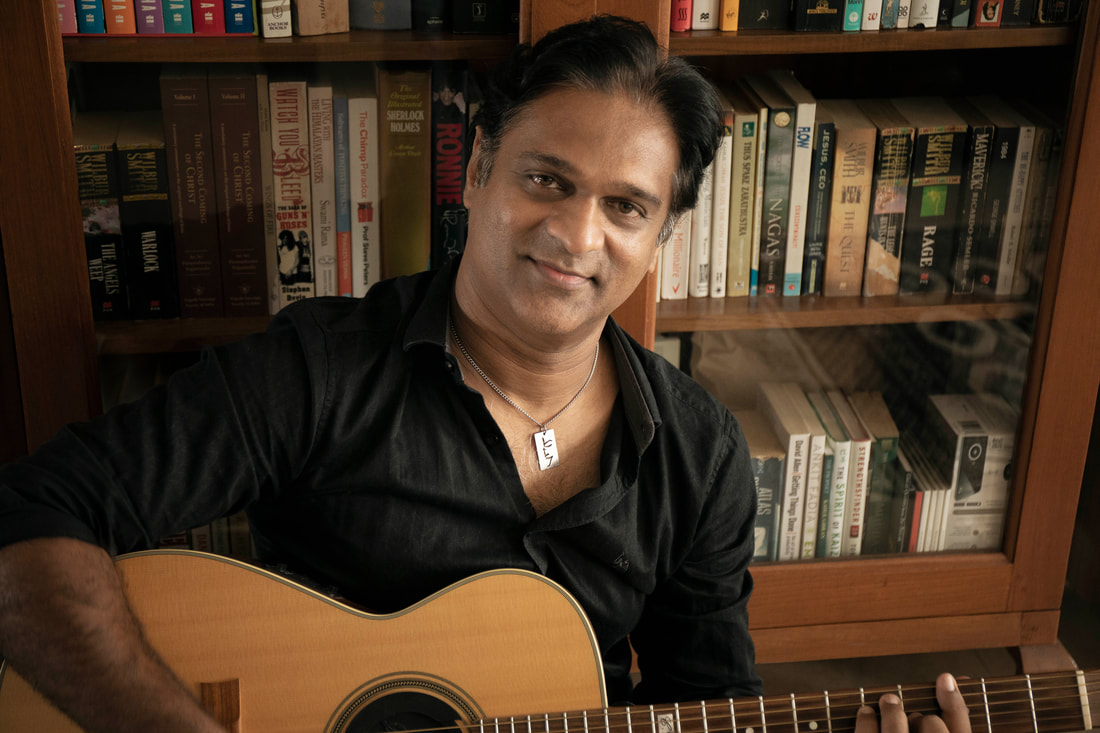 Eva Dowd is a fan 1st of this amazing Singer Songwriter , his  gift is his unique ability to combine Words and Music  that  connects with  listeners heart, soul and mind.   I am proud to have known Suraj Mani since 2008 and have truly  enjoyed being part of his musical journeys for over a decade.

Intro to  Suraj Mani:
A songwriter par excellence Suraj is a not just a rock poet, he is also part philosopher and all heart. Something that shines through in each word of every song, all of which are a labor of love and offered up in complete honesty. Lovingly called 'The Singing Sensei', by his fans, for his body of work with the legendary Indian band Motherjane*, Suraj takes us on a fresh new journey that showcases his prowess as one of India's finest poet songwriter. Do yourselves a favor and savor this wordsmith's musings, because they shine bright and lustrous in your mind, long after the last note fades out. And that’s why it's Art - pure, unpretentious and unrepentant.

﻿"We tripped on Suraj Mani's performance, but it was his answers about his journey that truly blew our minds! He was an excellent choice for our event- Geetha Ramamurthy, TIE Charter Member, Founder TIE Boston, CEO Ignite Career Confidence)

"The Dylan of Indian Rock Scene has finally arrived. The fact that the moniker of 'Rock Poet' hasn't been bestowed upon you by some overreaching music society but by the masses and your fans goes on to show that your music has emerged from amongst us...your fans and well wishers! For long after you're gone people shall remember what Surajmani's poetry did to his music ....and a generation's going to say...Boy!! what a TTTrip!!!.....i'm fine just joins the pantheon of your subtle poetic compositions which need to be felt and then be heard! ......Awe inspiring!!"-Reshi Kaul

"There is something magical about Mani's voice. No wonder he is dubbed as the ‘Singing Sensei’ by his fans. Every performance of his makes you want to take the road less travelled. His new avatar as a singer/songwriter amazes us too. We think it’s a challenge to perform in a room full of people with just an acoustic guitar and your voice, but Mani keeps the audience glued to their seats." 30 Vocalists That Changed The Face Of Indie Music In India- Avinash Kumai

"If you're looking for a poet and a performer, get Suraj Mani, the tattva tripper. An emotionally engaging and prolific Indian rock poet, Suraj's journey as the tattva tripper finds expression in acoustic rock poetry that touches the heart and takes you places. Showcasing strong lyric and context-driven compositions, Suraj's performances include everything from beautiful ballads to powerful social commentaries to inspirational anthems. To experience him live is for most people, a trippy and often transformative event. A poet and a performer who captivates audiences with his journey, Suraj began his musical career as the front man of Motherjane (2001-11) before re-inventing himself as the tattva tripper. Different things to different people, the tattva tripper is an idea that frees this artist and his audience for the road less travelled."-The Times of India

﻿"Suraj Mani is one of the most notable singers and song writers in the rock history of India. His series on the 'Tattva Trippers' is legendary. He plays out his world view in melodious compositions on his acoustic guitar. " -Timescity.com

"Suraj Mani has a way with metaphors like few other Indian rock musicians." -Rolling Stone Magazine

"Haunting melodies and brilliant world views. He did a 1.5 hr solo set for us with one guitar, and he had the audience in the palm of his hand." -Arti Rao, Bflat Event Programming.

"If you haven't seen Suraj Mani as the Tattva Tripper, you must! India's rock poet is back with a new journey and it rocks." - Sam Lal, NME
​
"Inspiring and thought-provoking! Suraj is an artist that everyone should know."- John Zachariah, CEO, Cap Gemini India﻿"﻿